I sit here brokenhearted. Just after last call this morning, the most deadly shooting in US history…50 killed, 53 hospitalized (so far) at Pulse, an Orlando nightclub.

My husband saw the news on his feed as he waited in the car with our pup while I got fresh bagels in the bagel store for the pack of teen boys back at the house. He told me when I returned to the car. I thought about our pack of boys sleeping soundly. I thought about the other parents who would never see their children again. We flipped through channels, listening to the different filters the media had already started to use.

The media was quick to say the nightclub was a gay club. (I wondered if they would point it out if it was a “straight” club.) They were also quick to point out it was a Latin event. (I questioned that as well.) Differences are treated differently–unless they’re not. We listened.

There was the channel that went straight to terrorism. There was the note from the shooter’s father that said this wasn’t about religion or politics, but rather that his son had seen two men kissing a while back and had been angry ever since unable to get the thought out of his head. There was the channel that reported the bodies were still in the night club (dead) and that the parents (some having received terrifying texts in the night from their children who were being held hostage in the club for hours after initial shootings) still had no idea if their children were alive or dead.

The channel that struck me the most was the one reporting texts back and forth between parent and child.  One note the newscaster read was from a son texting his mom he’s holding us hostage in the bathroom and he’s going to kill us. I’m going to die. I sat listening, tears welling up in my eyes, as I thought about all the players involved and how this pain would play out in the media. Causes would jump on board (guns, anti-terrorism, terrorism, mental health, religions, LGBTQ, anti-LGBTQ–the political contenders, media ratings) and as all these factions showed their various viewpoints, one faction that rests at the heart of all this shit may possibly get ignored: intolerance.

Princess Diana said it best: The greatest problem in the world today is intolerance. Everyone is so intolerant of each other.

Just those words, by some, would be considered hate words. While they sound like love words to me, in that linear left side of my brain, I get that we are all just results of the beliefs, thoughts, and ideas we’ve inherited from our family lines. Sure, there are a few segments of the population who really examine those–the seekers, willing to expand knowledge beyond familial and cultural legacy. But often those legacies forbid it. They say learning about other cultures, religions, ways of thinking, political standpoints–fill in the blank–is evil and not acceptable according to the framework they’ve been given. 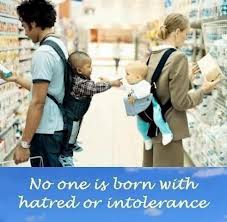 In truth, if each being on this planet could responsibly examine their own beliefs and prejudices outside what they’ve inherited, I believe we would be living in a completely different world. This would be a world not driven by fear that wells up as intolerance, first cousin to hate. This would be a world driven by heart and love–an understanding that we are all connected and we must take responsibility for looking at our own limiting beliefs that keep us from kindness.
It’s easy to point outside ourselves and see who did what, then retaliate. Our prisons are overflowing with that vibe. But to what end? More prisons, more cemeteries, more hate. The neverending story.

The cost is too high. Albert Einstein said “The most important decision we have to make is whether we believe we live in a friendly or hostile universe.” I always believe it’s the first, but this morning, as my heart ached for all involved in Orlando, the pain stopped me. It’s still so numbing. I get how people end up in the frameworks they cling to. But after a moment, I went back to my default place…

Love first. Be kind. Show compassion. Embrace differences, understanding if we were all the same this would be a very boring place. Join me on Team Tolerant? Our world can’t afford for us to let it down.

I'm on an adventure to bring happiness, relaxation, and some shine to a stressed out world. You might call it a Divine mission. Covid Season 2020 has taught me some important lessons about myself and about you, but most importantly about US. I have written about those in a book called Shine: When Chasing Sacred Spaces Goes Dark which came out December 2020 and hit #1 Bestseller in 7 categories out of the gate thanks to my readers. Right now, I'm blogging about fun, food, and wine at jamieweilwrites.com and sharing spa secrets I've been wanting to share FOREVER at spaguidesecrets.com. Stay tuned and get your robes ready. Home base: www.jamieweil.net
View all posts by @jamieweil →
This entry was posted in belief systems, facing your fears, healthy living, hope and tagged compassion, Einstein, embrace difference, Ghandi, hate, LGBTQ, love, mass shooting, most deadly shooting, Orlando, Princess Diana, Pulse, Team Tolerant. Bookmark the permalink.