There Are No Others: Thoughts on Philando Castile, Alton Sterling, and the Dallas Police Officers

What will it take to believe it?

On weeks like this one that just passed, I feel emotionally raw. The killing. All of it. Being against being. It fills me with pain. For Alton’s family. For Philando’s family. For all the Dallas officers’ families. For their communities. For all of us, as we are all connected.

“JR, you’ve always been color blind and you always will be,” my white, Texan-rooted rancher Dad used to say. He didn’t mean it as a compliment. But when my Berkeley-in-the-60s educated civil rights lawyer stepdad moved in, this poster went up. It read the blind are also color blind. That resonated with me, even at 6 years old. I didn’t know why exactly, but I like the picture. One human loving another. 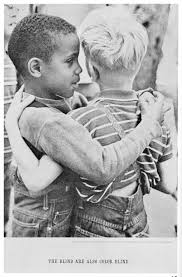 This was not the thinking of the collective in the town I grew up in. It was a white, conservative, Bible-beltish town where my Sunday school teacher (doubling as the town seamstress) used to call my mom and tell her I was going to hell when I missed Sunday school. Tolerance wasn’t a huge value. I watched my friends buy into it, but I never did. It just didn’t sit right.

When I moved to Westwood to attend UCLA, and there were many different types of cultures and races, all I wanted to do was talk to every last person and hear their stories–where they were from, how they grew up, what they believed. Those stories were so interesting to me. During my senior year as a Bruin, I married my college sweetheart, a black man from Long Island, NY. Nothing like an interracial marriage to uncover racist tendencies.

Discrimination came from all directions and all races. People had a hard time conceiving of how two people from different races could come together and fall in love. Hell, at that time it was still illegal in some states. Walking down the street, people would roll down their windows and yell racial slurs (at best) and provoke a physical fight (at worse.) Even family members who I thought would have been happy for me were not pleased at all let alone happy. It cost me long time relationships.

Two years later, when I gave birth to my first child, my awareness of underlying racism and stereotypes awakened even more as I watched how people looked at me and my child, trying to reconcile our skin differences. Adopted? From Africa? What gives? The things people say are mind boggling and it really showed me how pervasive this force is in our culture. The protective momma bear wanted to pound them any time they looked sideways at my baby. It was my job to protect and protect I would.

My child is now a 28-year-old college professor who shops at Whole Foods. He is educated, the most polite 20-something I know, funny, and has the most giving heart for service on the planet. People are constantly telling me how much they love him. Still, because his skin is brown, he is consistently followed by the Whole Foods secret police as if he’s going to steal some sea salt when no one is looking. Two months ago, on the same day a nice white police officer helped me turn my car around in Ashland (I was going the wrong way down a one way street) and sent me on my way with a smile and no ticket, my son was followed by a police officer for no apparent reason after leaving the market. He was tracked 15 minutes to his home.

The thing is, this is not unusual. I have never been pulled over and asked to sit on a curb and handcuffed in my life. This happened to my son while he was attending an undergraduate university in Southern California before he was 19. This was not the only incident.

As his mom, this hurts so much. I have a hard time reconciling the behavior. I have a hard time feeling I can convincingly say to him law enforcement is here to serve and protect you when FOR HIM this has been untrue so many times. For him, police are scary and could do serious harm if they chose. The scene in the movie “Crash” where Terrence Howard is pulled over after winning an award and his wife felt up by Matt Dillon’s character (a racist cop) is sadly a very real scene for many people of “other”.

Having said that, there are many wonderful police officers. And we can go ahead and replace those words police officers with “black people, white people, asian people, mentally ill people, gay people, straight people, transgender people, Muslim, Christian, Hindu, Buddhists–you name it.” We run the gamut.  There are people operating from hate and those operating from love–it all depends on how evolved the person is…how conscious. If the person is not entirely asleep, that person will understand we are all connected and what happens to one affects us all.  That’s why this eye for an eye shit is so ridiculously stupid. It’s like little kids on the playground whining: But he started it!

My only thinking is if everyone is blind, then won’t we be color blind? That’s a thought.

As for me, I’m going to continue to love. Even when it’s hard. Even when people are ridiculous. Even when I want to take my boots and stomp somebody. Won’t you join me?

I'm on an adventure to bring happiness, relaxation, and some shine to a stressed out world. You might call it a Divine mission. Covid Season 2020 has taught me some important lessons about myself and about you, but most importantly about US. I have written about those in a book called Shine: When Chasing Sacred Spaces Goes Dark which came out December 2020 and hit #1 Bestseller in 7 categories out of the gate thanks to my readers. Here, we begin a new adventure with Kai, our 103 pound lab, at the center: The Kai-nection. Dogs are the equalizers of all. (Home base: www.jamieweil.net)
View all posts by @jamieweil →
This entry was posted in belief systems, conscious living, healthy living, Inspiration, movement, resilience and tagged Alton Sterling, Crash, Dallas Police Officers, discrimination, Gandhi, hate, love, Matt Dillon, Philando Castile, racism, Terrence Howard, UCLA. Bookmark the permalink.

2 Responses to There Are No Others: Thoughts on Philando Castile, Alton Sterling, and the Dallas Police Officers