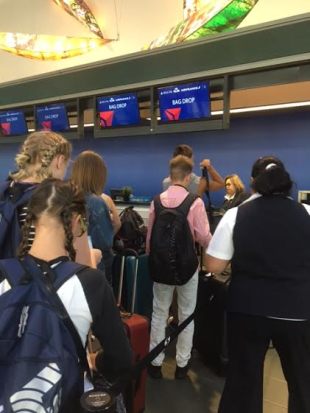 Yesterday my youngest son returned from his first trip outside the United States. He went to Europe with his AP History teacher and 25 classmates. He stood in the concentration camps in Germany, a deeply powerful experience he wasn’t sure he wanted to repeat. He stood above the clouds in the Swiss Alps, closer to the edge than “I would have approved.” He took waltzing lessons in Vienna, of which I definitely approved. He walked through castles, soaked up ancient architecture unlike what we have here on the baby West Coast of California, and bonded with new friends from his high school he may have never gotten to know on domestic soil.

During the period of time he was gone, 85 people were blown up in France (where his group had a plane change) and a coup went down in Turkey which left nearly 200 people dead. Now I know Europe is a big place, but when your baby is abroad for the first time and you really sucked in geography and aren’t sure what’s where, these turn of events can make a momma’s stomach turn. On the day before he was set to fly home, an axe-wielding man attacked and killed train passengers in a nearby town in Germany near where he was staying. It’s enough to make a parent never let their babies out of their room again.

Nevertheless, when my children are in new lands, I work very hard to keep my thoughts filled with a knowing that they are having a tremendous education and experience they could never get in the safety and security of their own backyard. I chat with their guardian angels–a lot. I hold a space of love and protection around them, and strong gratitude that they have adventurous spirits that lead them to explore a world that really, really needs their gifts.

While my son was traveling, I had a conversation with a good friend of mine who has been a friend since our early high school days. He mentioned his son (12) was on Safari in Africa with a friend and his oldest daughter (19) had just returned from Panama where she worked a stint as a translator in a group called Floating doctors, a nonprofit that delivers healthcare to remote areas. We talked about how when we were in high school we barely saw the back end of a plane. Our kids, on the other hand, are the world’s children. They are adventurous, collaborative, heart-centered beings who I believe, given the right opportunities and encouragement, can evolve our world as it needs to be evolved.

It’s tempting to hold them close, to “small town” the hell out of them and encourage them to stay close to home and never leave. I understand this cycle and this temptation, as I grew up in a small town and now have moved back to that small town. There are many family compounds here built over generations of folks who have never left. There is much fear of the big, bad unknown. For example, my son was driving with his friend’s mom and told her of his plans to attend a university following high school. To this she said, “You need to be really careful in college because it’s really dangerous. 85% of the people there have venereal disease.”

But the vision that comes from seeing lands, people, and places different than you is huge. If we let fear make that world too small, coddled in the arms of familiarity and perceived safety, we will not let our children heal the world to the extent they have come here to do. They have come, not just to tour humanity, but to immerse in it–to promote collaboration and defy ignorance. They have eyes that see the common-love through line that pulls through diverse people, cultures, and places.

My son made the comment, “It seems like people are more sophisticated here in Europe.” Then he added, “And they eat too much coffee and cake.” From the mouths of teens.

The insights gained in a few weeks touring new lands, far from the safety of his family and domestic protection, will continue to unfold. The moments that came from standing in and on new lands will mean so much more as facts pour forth from textbooks. The fact that he was with his classmates made this world curriculum so much more poignant than had he traveled with us.

This is true for each of us. We don’t have to board a plane to Vienna to step into the unfamiliar and open our eyes to a new way of thinking. Try something new that might jack up our anxiety. In doing this, we really live and start to see what an incredibly rich world lies before us waiting to be explored.

I'm on an adventure to bring happiness, relaxation, and some shine to a stressed out world. You might call it a Divine mission. Covid Season 2020 has taught me some important lessons about myself and about you, but most importantly about US. I have written about those in a book called Shine: When Chasing Sacred Spaces Goes Dark which came out December 2020 and hit #1 Bestseller in 7 categories out of the gate thanks to my readers. Here, we begin a new adventure with Kai, our 103 pound lab, at the center: The Kai-nection. Dogs are the equalizers of all. (Home base: www.jamieweil.net)
View all posts by @jamieweil →
This entry was posted in anxiety, awakening, belief systems, conscious living, France, healthy living and tagged Europe, explorers, Floating Doctors, France, Germany, Panama, Swiss Alps, Turkey, Vienna. Bookmark the permalink.